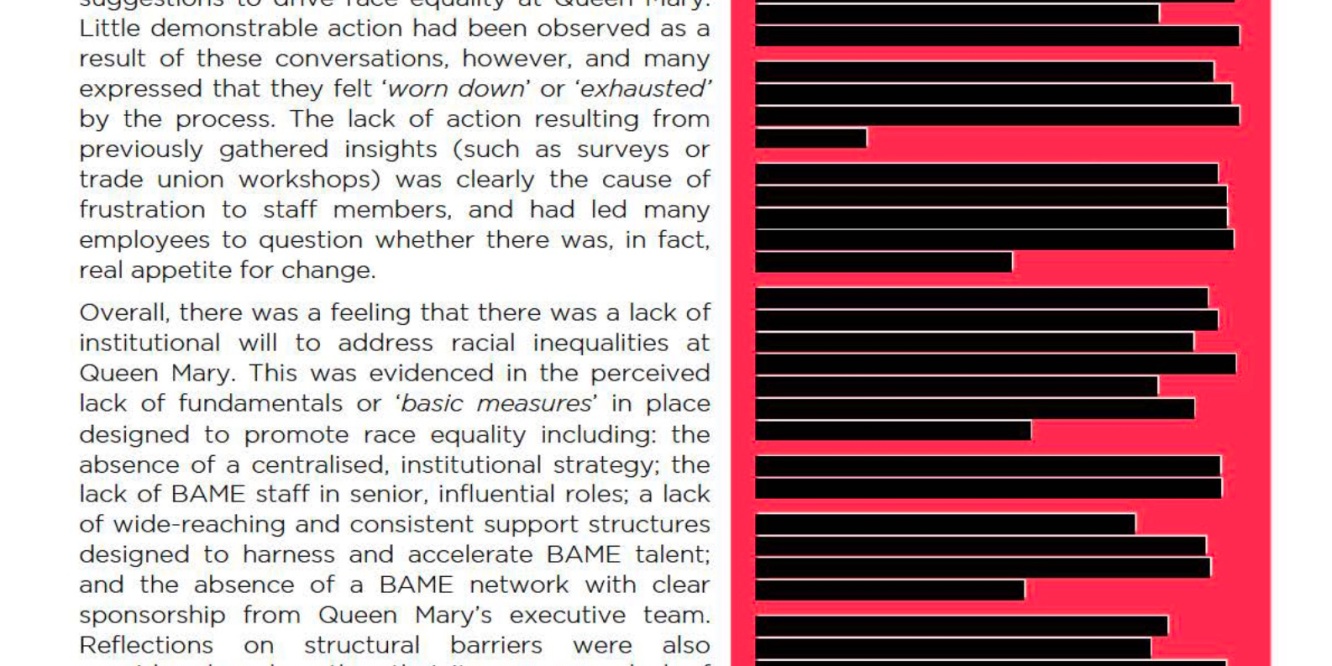 Nearly two years ago Queen Mary comissioned a report into racism and other equalities issues at Queen Mary. Last summer the ‘Inclusion Report’ with appendices containing testimonies from members of staff was finally produced and presented to the Equality Diversity and Inclusion Steering Group. However by the time it was made available to staff, these appendices containing essential (and damning) testimonies had been removed. In October QMUCU and Unison wrote to the Chair of the EDISG requesting that the Inclusion Report be published in full. The response came back that the testimonies in the appendices could not be published because of issues of ‘anonymity’. QMUCU responded urging once more that the report should be published in full and that contributors had given informed consent. In the meantime, an FOI was submitted. QMUCU also published testimony from staff that was strikingly similar, from its own gatherings organised by QMUCU Equalities Reps.

Finally after several months of stalling, the full report has now been published by Queen Mary and can be found on their HR pages. But look closely. There is something very different between the two versions (via FOI and on HR pages). While the FOI version includes the text boxes containing the damning testimony, albeit blacked out, Queen Mary’s version has simply removed the text all together. The Inclusion Report has become the Exclusion Report.

You can see the two different versions below.

2. And below is an example of the Inclusion Report available on the QMUL HR webpages. A screenshot of page 32, a section in the appendices where it is reported that BAME staff feel that there is ‘a lack of institutional will to address racial inequalities at Queen Mary’.

Now compare this version to p.32 of the FOI version. No redacted text in the red box any more. All evidence of the redacted text containing testimonies describing racism and other examples of social injustice at Queen Mary has been removed. This is how to make the Inclusion Report an Exclusion Report.